Comparative Anatomy are another group that I have liked for many years. Their 2010 CD Mammalian is really good. I have been waiting ever since for a follow-up album, which never seems to come.

They are an experimental drum & bass band from Charlottesville, Virginia. Known for their elaborate costumes, absurd humor, simple but diverse textures and unique sound, the band has become known in the experimental and noise rock scenes for their outlandish performances. Their early work has been referred to by reviewers as a “patchwork, cut-up style” similar to bands like Mr. Bungle, but recently they have created their own unique sound with robotic sounding bass lines, frenzied loops of animal samples, and beat-focused drums. To date, they are the only band to consistently use animals for vocals, recording their sounds in a variety of settings and programming them to the music, often altering the sounds and layering them in their more recent work.

Comparative Anatomy started as an experiment in 2009 between the two main members, Sir Puffers Rabbinald the Third and Ron Chickenbaby. At this time, the band name was not yet chosen. The original line-up went through several guitars and one real drummer, all of who were eventually eliminated. After deciding to work alone, the group took a different route, eliminated guitars altogether and moved away from the quirky, death metal sound where they started as well as completely scrapping vocals. Their musical direction began to take an experimental, drum & dual-bass approach utilizing special tunings, a drum machine, and various samples from a variety of sources. They’re known for its odd humor, which relies heavily on absurdist and quasi-dadaist dialogs with the crowd and symbolism focusing totally on animals.

During live performances, Comparative Anatomy is known for wearing costumes, which were at first simple designs made with dismembered, stuffed animals, but eventually became elaborate and full-body pieces hand-made by the two main members featuring everything from top hats to black metal guantlets. In addition, their live act involves a set of films and animations created by the band that follow the music and are projected behind them on a giant screen.

Another cool thing about them that I like very much is that they tour in a refurbished ambulance, playing their music over the PA system as they approach their performances.

If you ever wonder what a Mike Nobody solo performance looks like, without a real band onstage, this probably isn’t far from it… minus the costumes. 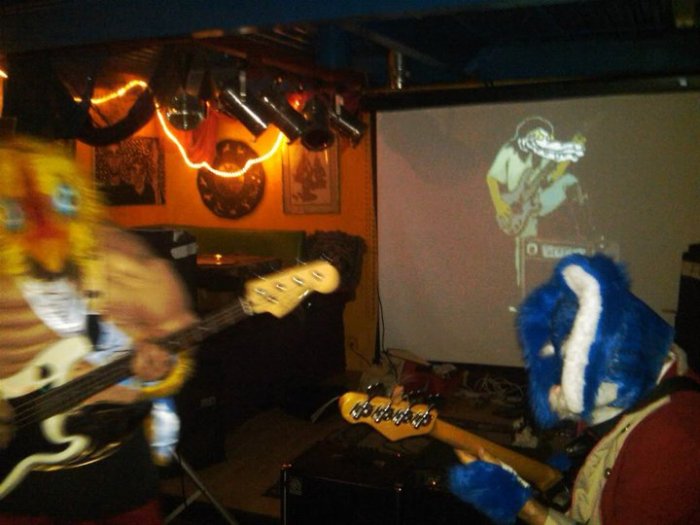