Lions and Tigers and… Nazis?
Filed by: Sara Whitman
September 13, 2009 11:30 AM
The first few times I heard the right wing call Obama a “Nazi,” I ignored it. Thought it was random. After all these years, I should know not a single thing comes from the right that hasn’t been vetted, considered and framed.

Nazi? I’m not sure I even understand how they got there or who they are trying to rally. I mean, the skinheads aren’t going to go run and side with Obama as the supreme Nazi. I just saw a photo of Nancy Pelosi branded as a Nazi- pretty sure they aren’t going to go rally behind her, either.

The Nazis were not communist- rather anti- communist. They called themselves socialists, but in truth, they were fascists. State controlled, dictatorship that allowed no critique of any kind of the government.

I didn’t see anyone going to jail for screaming “lie!” the other night. Or marching in the streets, or writing articles, or telling seniors they will be subjected to death panels.

Again, the Nazi image rears it’s ugly head. Why? I’m not sure who they are trying to rally. Extreme right folks tend to think the holocaust didn’t happen. Or that having an extreme nationalism, eugenics and separation of races isn’t a bad idea. They kinda like that stuff.

Is this an attempt for the right wing to reestablish itself with the soccer moms of America? People who do think the Nazi’s were evil but also can’t stand someone standing up and believing social justice is a good thing? That the embracing of the far far right has left them powerless and they are coming back to the mushy middle, dredging up fears, and selling their snake oil policies to them?

Long live the health care companies! As if that will help under and uninsured. But fight against the Nazis? Well, that’s noble, isn’t it?

Several people have said to me lately, we have to keep a keen eye out for what is going on. All this progress will certainly be followed by a backlash.

And the right does nothing without a careful plan.

Lions and Tigers and Nazis… time to ask the question why. 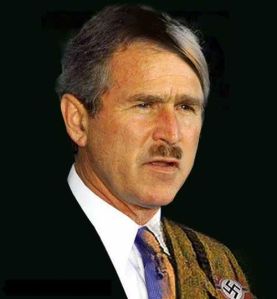 Published on Wednesday, March 4, 2009 by Consortium News
How Close the Bush Bullet
by Robert Parry

Earlier this decade when some of us warned that George W. Bush was behaving more like an incipient dictator than the leader of a constitutional republic, we were dismissed as alarmists, left-wingers, traitors and a host of less printable epithets.

But it is now increasingly clear that President Bush and his top advisers viewed the 9/11 attacks as an opportunity to implement a series of right-wing legal theories that secretly granted Bush unlimited power to act lawlessly and outside the traditional parameters of the U.S. Constitution.

These theories held that at a time of war – even one as vaguely defined as the “war on terror” – Bush’s powers as Commander in Chief were “plenary,” or total. And since the conflict against terrorism had no boundaries in time or space, his unfettered powers would exist everywhere and essentially forever.

According to his administration’s secret legal memos released Monday, Bush could waive all meaningful constitutional rights of citizens, including the First Amendment’s protections on free speech and a free press.

John Yoo, a deputy assistant attorney general at the Justice Department’s powerful Office of Legal Counsel – which advises a President on the limits of his constitutional powers – declared that Bush could void the First Amendment if he deemed it necessary to fight terrorism.

“First Amendment speech and press rights may also be subordinated to the overriding need to wage war successfully,” Yoo wrote in an Oct. 23, 2001, memo entitled “Authority for Use of Military Force to Combat Terrorist Activities Within the United States.”

Yoo then added ominously, “The current campaign against terrorism may require even broader exercises of federal power domestically.”

What was particularly stunning about Yoo’s reference to waiving the First Amendment – a pillar of American democracy – was his cavalier attitude. He tossed the paragraph into a memo focused on stripping Americans of their Fourth Amendment “right of the people to be secure in their persons, houses, papers and effects, against unreasonable searches and seizures.”

While saying that Bush could order spying on and military attacks against U.S. domestic targets at his own discretion as Commander in Chief, Yoo added, almost in passing, that the President also could abrogate the rights of free speech and a free press.

Another Yoo memo, dated June 27, 2002, essentially voided the Sixth Amendment and a federal law guaranteeing Americans the right to public trials. In the memo, Yoo asserted that Bush had the power to declare American citizens “enemy combatants” and detain them indefinitely.

Under Yoo’s analysis, an alleged “enemy combatant” would have no legal recourse, since Bush’s Commander in Chief powers trumped even habeas corpus requirements that the government must show cause for imprisoning someone. Further, this opinion wasn’t just hypothesizing; it provided the legal basis for indefinitely detaining U.S. citizen Jose Padilla.

Though the U.S. Supreme Court ultimately issued a narrow 5-4 decision overturning Bush’s supposed right to deny habeas corpus and punish “enemy combatants” through his own military court system, many of Yoo’s concepts survived in the Military Commissions Act, which was passed by the Republican-controlled Congress in 2006.

While the law appears on the surface to target only non-citizens, fine print deep in the legislation makes clear that the Bush administration still was asserting its power to detain U.S. citizens who were viewed as aiding and abetting foreign enemies and to punish those citizens through military commissions that denied normal due-process rights to defendants.

The reference to people acting “in breach of an allegiance or duty to the United States” would not apply to Osama bin Laden or al-Qaeda but would cover American citizens.

The Military Commissions Act remains in effect to this day, although President Barack Obama has vowed not to apply it, favoring use of regular civilian or military courts.

Though some of us have cited Bush’s determination to override key constitutional protections for years (see, for instance, our book Neck Deep), few critics – including me – thought to include the notion that Bush was interested in suspending the First Amendment.

The significance of Yoo’s throwaway paragraph about throwing away the First Amendment is that it suggests that the Bush administration intended as early as October 2001 to act against journalists and citizens who were viewed as undermining Bush’s “war on terror” through public comments or disclosures.

As a right-wing legal scholar, Yoo surely shared the Right’s knee-jerk animosity toward past reporting on the Watergate scandal and the Vietnam War’s Pentagon Papers, as well as contempt for Americans who demonstrated against the Vietnam War.

But his First Amendment reference also may have reflected the thinking of senior Bush aides in those early days of the “war on terror” as they collaborated with Yoo in formulating his legal opinions.

In his 2006 book War by Other Means, Yoo describes his participation in frequent White House meetings regarding what “other means” should receive a legal stamp of approval. Yoo said the “meetings were usually chaired by Alberto Gonzales,” then White House counsel, and involved Vice President Dick Cheney’s legal counsel, David Addington.

So, a seemingly incongruous reference to overriding the First Amendment – in a memo centered on overriding the Fourth Amendment – could be explained by the desire of White House officials to have some legal cover for actions aimed at journalists who were exposing secrets or whose reporting might weaken the national resolve behind Bush’s actions.

It also suggests that Bush’s critics who exercised their free speech rights in challenging his “war on terror” could have become targets of special government operations justified under Bush’s Commander in Chief powers.

In other words, Bush’s assault on America’s constitutional Republic may have been more aggressive than many of us imagined. It was a bullet that came close to the heart of a dream dating back to 1776.

© 2009 Consortium News
Robert Parry broke many of the Iran-Contra stories in the 1980s for the Associated Press and Newsweek. His latest book, Neck Deep: The Disastrous Presidency of George W. Bush, was written with two of his sons, Sam and Nat. His two previous books are Secrecy & Privilege: The Rise of the Bush Dynasty from Watergate to Iraq and Lost History: Contras, Cocaine, the Press & ‘Project Truth’.

Former CIA director James Woolsey rejects the notion that the invasion of Iraq has triggered the end of neoconservativism in American politics, and argues the Iraq War was not a mistake.

James Woolsey discusses the failure of the intelligence community in the run-up to the Iraq war and considers Barack Obama’s selection of Leon Panetta to head the CIA in light of the historical relationship between the president and the CIA director.

He outlines the challenges the intelligent community faces in what he calls America’s war against “theocratic totalitarianism.”

Finally, he asserts that it is imperative for us to destroy oil as a strategic commodity — not only for our security but also for the good of the planet – Hoover Institution

Robert James Woolsey is vice president of the consulting firm Booz Allen Hamilton and an officer in its global resilience practice.

Previously, Woolsey served as director of the Central Intelligence Agency and delegate-at-large to the US-Soviet Strategic Arms Reduction Talks and Nuclear and Space Arms Talks. He has also been a partner in the law firm of Shea & Gardner in Washington, DC.

Woolsey is currently co-chairman (with former Secretary of State George Shultz) of the Committee on the Present Danger, as well as chairman of the advisory boards of the Clean Fuels Foundation and the New Uses Council and a trustee of the Center for Strategic & International Studies and the Center for Strategic & Budgetary Assessments. He also serves on the National Commission on Energy Policy.

Peter M. Robinson is a research fellow at the Hoover Institution, where he writes about business and politics, edits Hoover’s quarterly journal, the Hoover Digest, and hosts Hoover’s television program, Uncommon Knowledge. Robinson is also the author of three books: How Ronald Reagan Changed My Life; It’s My Party: A Republican’s Messy Love Affair with the GOP; and the best-selling business book Snapshots from Hell: The Making of an MB.

This work is licensed under a Creative Commons Attribution-NonCommercial-ShareAlike 4.0 International License.