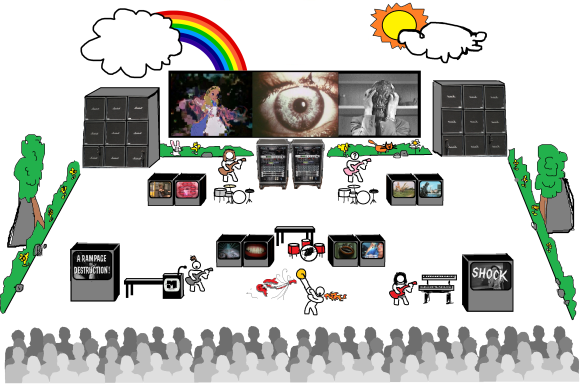 The Island of Misfit Noise went through many permutations during its original 15-year run.

MarshaKat and myself were the the only constants of the group, a bassist and keyboardist who both played some guitar.

The name changed a few times before we finally settled on the IOMN.

Now, it is not as much of a real band as it is a recording project, with many contributors coming and going.

I still wish that I could have made it work somehow.

One element that I wanted very badly was having two drummers, who could play some interesting rhythms that would be impossible for a single percussionist.

I dug bands that had double-drumming lineups, like Grotus, the Melvins, the Butthole Surfers, the Boredoms, … Hell, even the Grateful Dead, the Doobie Brothers, the Allman Brothers, and James Brown’s backing band the JB’s all had two drummers.

Unfortunately, finding any drummers around the Detroit area who are into that sort of thing was nearly impossible.

We had it going like that a few times.

It was great while it lasted.

But, they always quit before we could accomplish very much together.

Finding even a single drummer was sometimes difficult because, as one guy put it, my ideas were “too big and weird.”

I guess projecting a bunch of surreal film footage on a wall behind the band is too ambitious for some.

I eventually built my homemade ShitKit drumset because it didn’t look like we were getting anywhere without a dedicated percussionist.

I preferred the clunkiness of hitting pieces of scrap metal over the sound of commercially-bought cymbals anyway.

But, I am a shitty drummer and I know it.

For awhile, we had one guy named John Pirog – who’s only job was breathing fire and smashing shit up, like old TVs and guitars.

It was pretty cool, while it lasted.

But, he left to go make independent horror movies instead.

I thought it would be cool to maybe have three guitarists, one playing a classic Gibson SG through a Marshall amp, one playing a modified Les Paul with a Line 6 Variax installed inside hooked up to a really good quality Line 6 guitar/amp/effects emulator rackmount, one playing a Roland-Ready Fender Stratocaster with a bunch of Roland guitar synths and emulators, etc.

Either we could have had guitarists double on keyboards & samplers or simply had a dedicated keyboardist.

Currently, I kind of make-do by making sound collages on tapes and playing them back on my Dictaphone machine.

Will the IOMN ever be a real band again?

It is always possible I guess.

Will it ever be what I have pictured in my head?

It will just be whatever I am able to scrape together at a given time.

But, that is life.